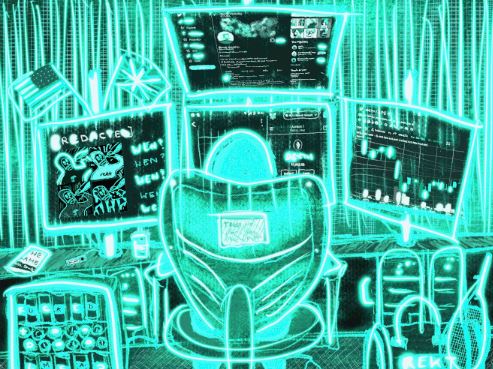 Ovie Faruq was bored at Barclays. Having joined the bank as an intern in 2011, worked as a credit trader in London for six years, and then moved to New York as a high yield trader with the bank in 2018, his enthusiasm for the job was flagging.

"The worst part of being a trader was probably that it sucked away my life," Faruq said in April. "We were working 7:00 till 5:00, or 7:00 till 6:00 and in the evenings we had to go to networking things, so that ended up being my life for almost 10 years without really being able to do much outside of it."

Despite studying mathematics and economics at the London School of Economics, Faruq said he always had artistic inclinations. As a teenager, he bought and sold cameras and used Photoshop to create wild images that were part space-fantasy, part terrestrial reality. But when he went to university, this all stopped: "I just didn't have time to continue art as a hobby when I started university. I basically just dropped it."

That was, until he got bored in Barclays' morning meetings. During one meeting at Barclays in NYC, Faruq said he "was just doodling stuff" in his notepad and ended up drawing "a picture of this guy wearing a hoodie with a skull face." The semi-autobiographical character evolved into RektGuy, one of a series of NFTs which are in the process of making Faruq famous.

Faruq didn't respond to a request to comment for this article, but he said previously that he became fascinated with NFTs after he'd been out drinking following his resignation from Barclays. "I came home and I had a few drinks and I couldn't really sleep. It was 3:00 AM and I was still up," he said. "I was scrolling through Twitter on my phone. I saw a bunch of people minting this thing called Bored Ape Yacht Club."

Faruq had already been involved with NFTs prior to that point, but he ended up minting ("buying") 150 Bored Ape NFTs. "I was a little bit drunk. I just quit my job. It looked cool and I went for it," he said. Faruq's Barclays' colleague Mike Anderson, who introduced him to NFTs, tried to persuade him to hold back by pointing out that he was intoxicated and "in a bit of a panic life crisis mode," but Faruq didn't listen.

That was April 2021. Faruq had quit Barclays in New York to join HSBC, but Barclays convinced him to stay, and he returned to London with the bank to trade emerging markets. He and Anderson subsequently left the bank together in March 2022. The two men now run Canary Labs, an NFT investment and advisory company. But Faruq is now also emerging as a big NFT artist in his own right.

"I used to be really into art, and I actually forgot that for a very long time. When I was a kid, I was always drawing and painting. I was good at doing it at school, I liked being creative," said Faruq.

Faruq super-fans can buy single editions of his work on SuperRare for up to $80k. Alternatively, you can currently buy your own Rektguy avatar on OpenSea for the equivalent of $1.6k, a Faruq-created flashing NFT set in a red-light district for $31k, or the semi-autobiographical portrait of Faruq sitting on a trading floor (shown above) for $3.4k. Faruq gave most of these away for free, but he gets a royalty of between 5-7.5% for each trade.

Faruq isn't entirely negative about his career as a trader. - He says it taught him valuable lessons in risk-taking which have informed his new venture with Anderson investing in NFTs. However, it's for his art that he's becoming particularly well known. And his art has the potential to be quite lucrative, particularly when trading volumes rise dramatically on the back of a big celebrity endorsement.