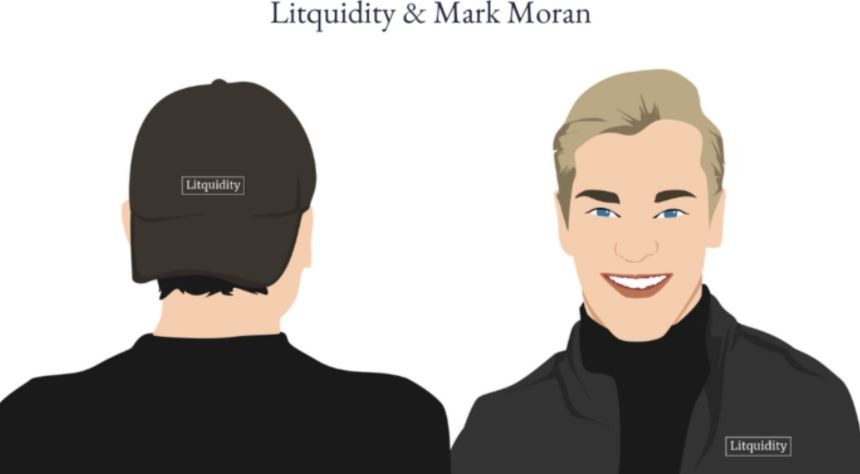 No one knows the identity of the man who set up the Litquidity Instagram account in 2017. The only known facts are that he's 30 and he worked in investment banking and private equity. All else is a mystery. But Litquidity has a new frontman, and he's more than willing to put himself about.

"We've grown into friends," says Mark Moran, who joined Litquidity as head of growth and operations last year, of his anonymous colleague. "He was working in private equity and he felt that he had more creative ability than he would be able to capitalize on while he worked in finance. He's like the king of memes - the speed and precision with which he can create a meme is crazy."

Moran has arrived to help monetize Litquidity. What started as a meme site is now making money from advertising and is branching into podcasts. Lit and Moran have just signed a $1.5m one year sponsorship deal with crypto exchange, CoinFLEX, as an extension of their Big Swinging Decks audio product. "We want to start talking about DeFi and to mix the worlds of traditional finance and DeFi," says Moran. "We've been focused on traditional finance historically."

Moran knows traditional finance well. Before he joined Litquidity he was an associate at Lazard and then Centerview in New York. He was on the Centerview healthcare team, and healthcare M&A was one of the boomiest of the boom areas last year, so maybe Moran (who left in March according to his FINRA profile) quit sort of prematurely?

He thinks not. If he'd stayed any longer, Moran said he would never have got out. "I kind of thought once I get promoted to principal, I am going to make more money than I could ever make doing anything else, and as I turned 30 I wasn't sure it was the best use of my talents and abilities." Moran has said previously that he earned $400k at Centerview in 2020. "I constantly worked over 100 hours a week," he says.

But the hours weren't the issue, and nor was the pay. Much as 100 hour weeks are excruciating, Moran says Centerview made them palatable: "Centerview don't see you as being there for a short amount of time - they want to help you grow, so they're very strategic in the types of work they give you to push you and help you develop your skill set in a way that a lot of other places don't. They see you as being there for the long term."

In a generous industry, Centerview is also known for being more generous than almost all (if not all) its rivals. Centerview doesn't publicly disclose global pay figures, but in the year to March 2021 it employed 42 people in the UK and paid them a total of £12.3m, or £294k each. Over the same period, the average UK partner earned £3m and the highest paid partner earned £6.6m. This is all the more impressive given that Centerview's dollar is paid almost entirely in cash, with employees effectively earning a cut of the fees they generate. Centerview also sounds like a fun place to work. - Senior staff would wear elf hats to award bonuses, claims Moran; "It was like Christmas," he says.

Moran quit Centerview initially to go on the reality TV Show FBOY island. It was an idea that came to him after a colleague suggested he think about a career in broadcast TV. Initially, most Centerview people were skeptical. Moran says they're now over that. "People say to me, "We thought you were crazy at first for going on the reality TV show, and now we see that what you're doing makes a lot of sense.""

What Moran and Litquidity are doing is moving beyond memes. Alongside the podcasts, they run a venture investments arm. They plan physical events (Hamptons parties), educational materials, and a service catering for bankers moving to private equity. They see themselves as the authentic voice of reality in an industry of gloss. Having campaigned to increase pay for junior bankers, Moran says the next thing is reducing banking hours. They also plan to give women a voice: A mysterious female hire is joining soon to create a new podcast called 'Big Swinging Divas.'

Aged 30 and outside of traditional finance, Moran is having fun - even if he did just walk away from the biggest payday in the history of junior banking. Life isn't just about money, though, he reflects: "There was one day when I went into the office at the weekend and there were two partners there who'd both made well over $15m the previous year, and I thought they were probably only there because they hated their wives, or their wives hated them..."

Does he ever look at Litquidity's precursors and worry it might a flash in the pan? While Liar's Poker is still going strong, the authors of 'Monkey Business' and 'Damn it Feels Good to be a Banker' are largely forgotten; the guy behind Wall Street Elevator is now selling socks. Moran says he isn't worried: "This is the perfect time to do this. It's like Gandhi said: "First they ignore you, then they laugh at you, then they fight you, then you win."

Sometime soon, we may even learn who Litquidity really is. Moran says there's talk of a "big reveal" at a Hamptons party this summer, although they're not committing to anything.

Got a tip or a story idea? Contact: sbutcher@efinancialcareers.com in the first instance. Whatsapp/Signal/Telegram also available (Telegram: @SarahButcher)